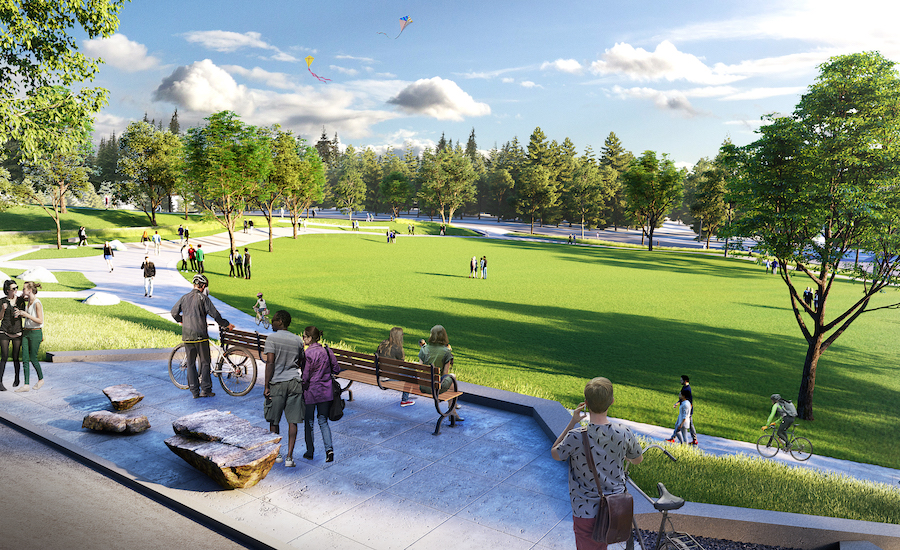 Accessibility Experts and Architects Consider 30 Years of the ADA

The following is an excerpt from ArchitecturalRecord.com. Marcela Abadi Rhoads, owner of Abadi Accessibility is quoted in the article:

This month marks 30 years since President George H.W. Bush signed into law the Americans with Disabilities Act (ADA) on July 26, 1990. One of the most sweeping pieces of civil rights legislation in the country’s history, its guidelines and protections have changed the way we work, learn, and move through space. For architects and planners, it has meant a complete shift in thinking about accessibility and inclusive design. Now, on this landmark anniversary, experts weigh in on how far we have come and what a more equitable future might look like with the help of ADA.

Read the article in its entirety here.

There are a few of requirements in the 2010 ADA Standards that speak about  ways that people get around.  Some are described as either  “circulation path”,  “path of travel”,  “accessible route” or “vehicular path”.  Those all speak about either a car, wheelchair or pedestrian means of getting different places.  In my experience, there is a misunderstanding about the difference between “circulation path” and “path of travel” and “accessible route”.

Path of Travel and Accessible route are mainly describing the “unobstructed” path that a wheelchair user would take. 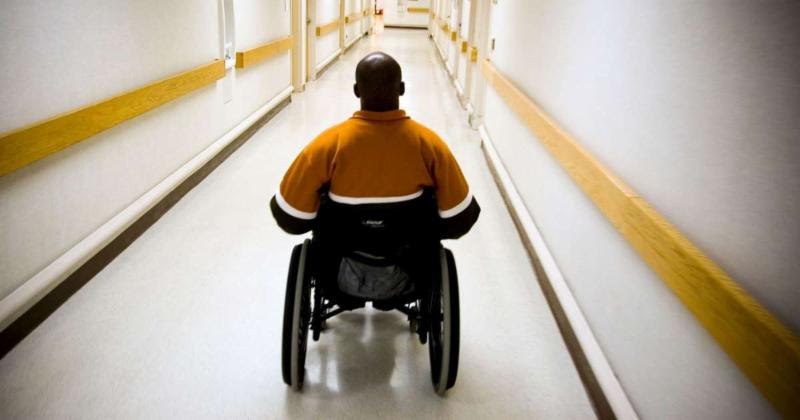 But a circulation path is speaking about a path where any pedestrian would use to get around.  As it pertains to Americans with disabilities, this term is used for persons who are visually impaired, but are still able to walk. 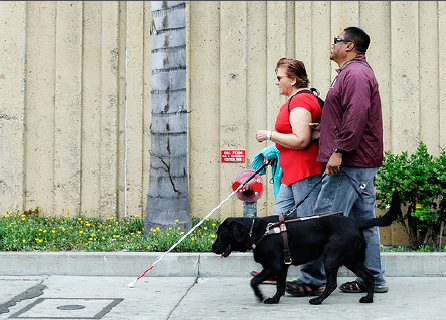 The idea is that a person who cannot see very well cannot detect certain hazards along the path that he will take to find his way around (i.e. the circulation path).  This newsletter will discuss this concept and will give examples of some “circulation paths”

When a person who is visually impaired is walking to find their way, that is a description of his or her “circulation path”.  Since they cannot see, we are required to make sure there are no hazards along their path.  Those hazards are any objects located along the circulation path that are mounted higher than 27″ a.f.f. or lower than 80″ a.f.f. and projects more than 4″ onto the path. 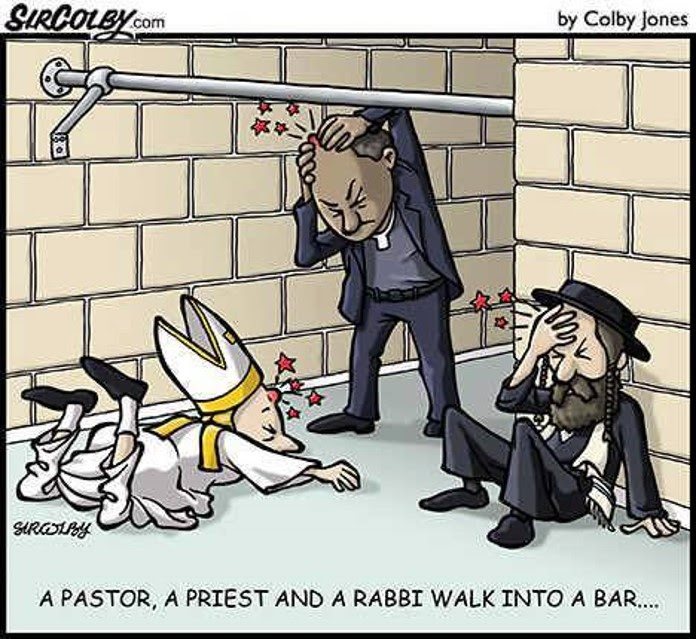 ….because the bar is a protruding object

A protruding object, cannot be detected by a cane which is one of the ways that a person who is visually impaired finds their way. Here is a video by the US Access Board that explains this topic.

A circulation path, on the other hand,  can be used by anyone.  It describes the path that a person who can walk will be taking.  And that can really be anywhere that leads you from one place to another.  Below are some examples:

The obvious circulation path is a corridor.  That is what most people think of when they see the words “circulation path”.  Along a corridor, make sure the sconces are not mounted lower than 80″ a.f.f. if they are deeper than 4″. 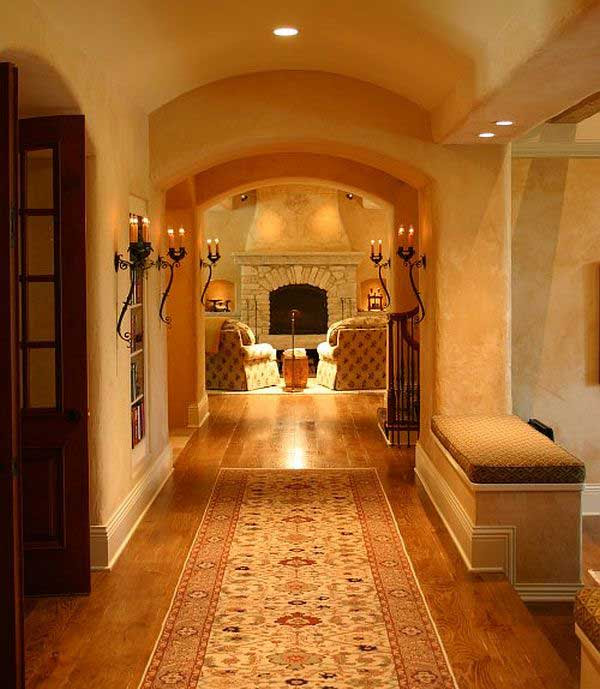 A corridor is a circulation path.

A circulation path can be anywhere where people are walking.  So from one side of the bar shown below to the other side is a circulation path and the counter should not project more than 4″ onto it. The bar top projects more than 4″ onto the circulation path between one side of the bar to the other.

The path to the restroom door is a circulation path.  The paper towel dispenser is mounted along that path and it is deeper than 4″, therefore it is a protruding object. 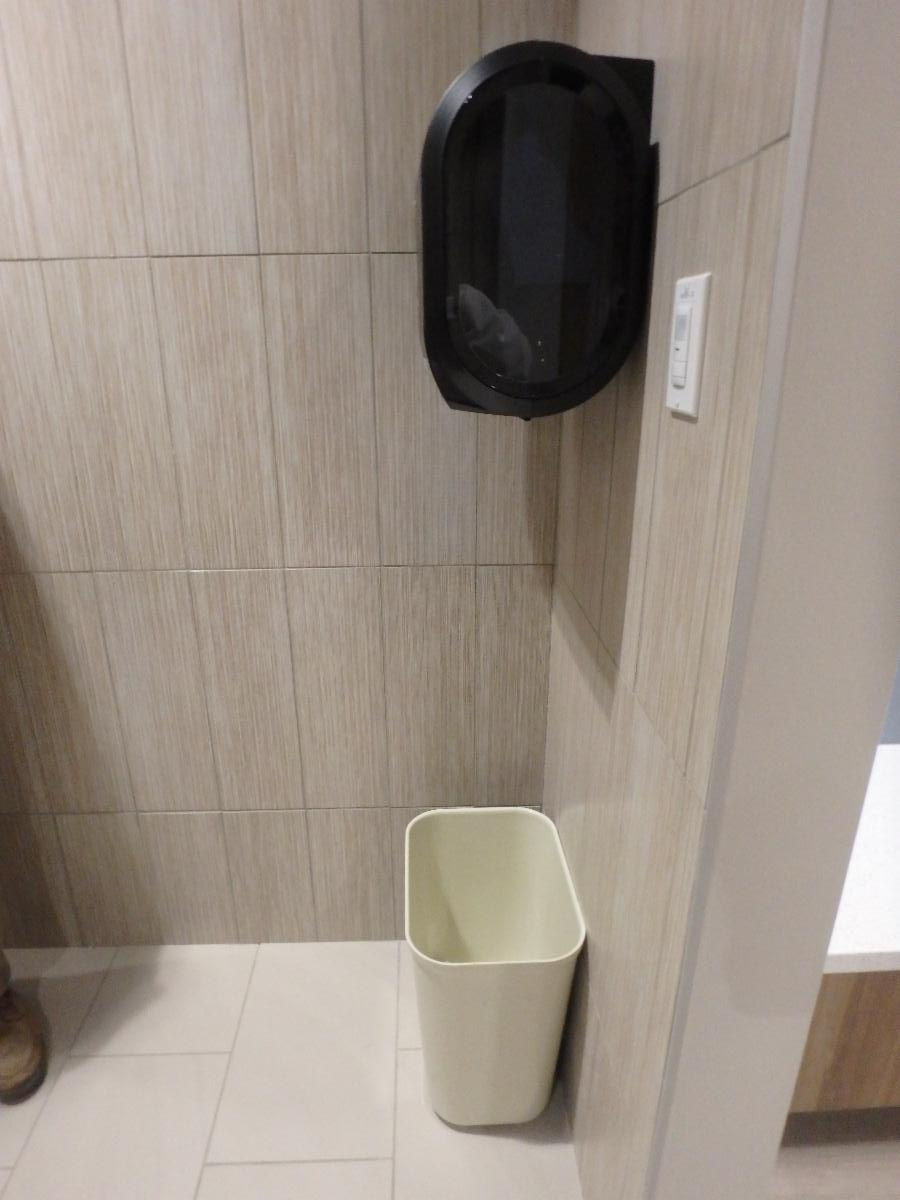 The paper towel dispenser in the restroom is located along the circulation path.

The circulation path to the desk has a display cabinet that projects more than 4″ onto it. 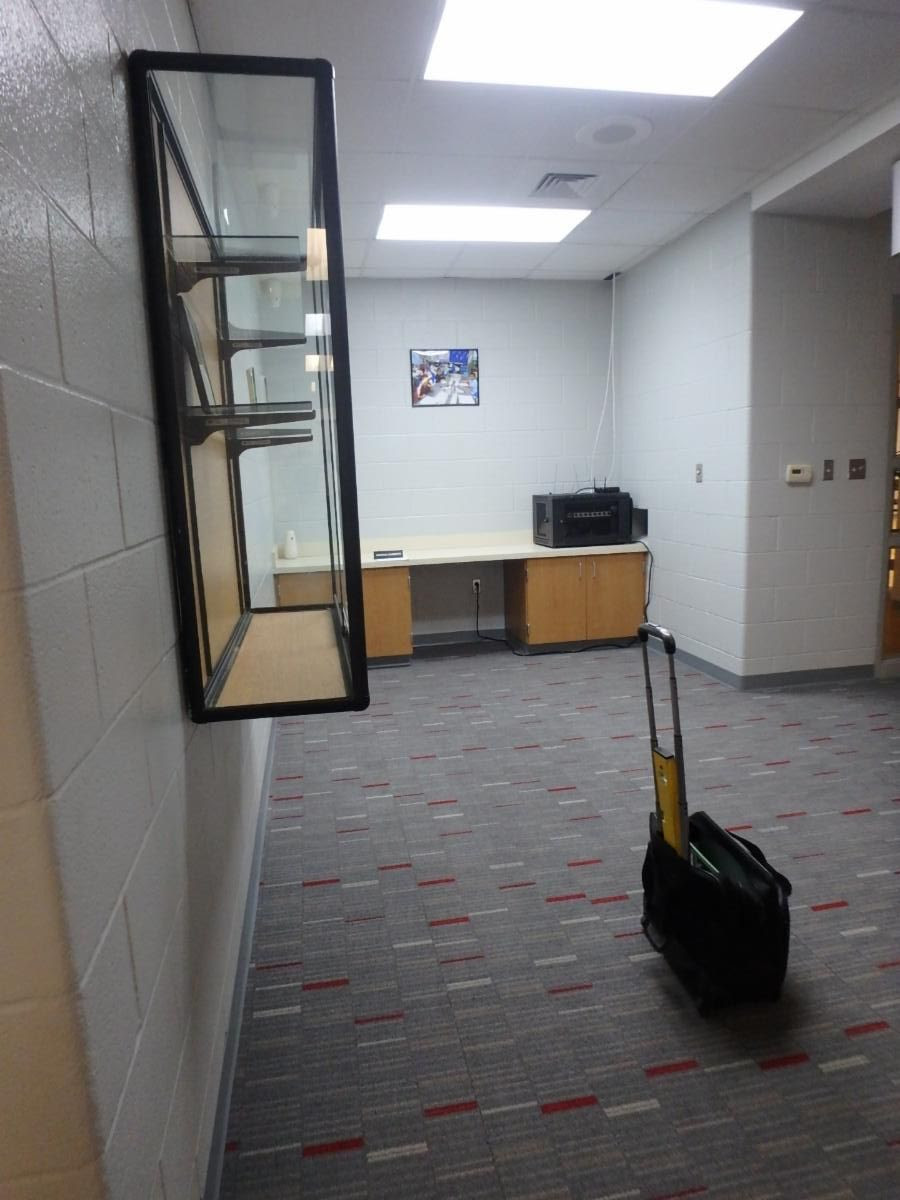 The display case is located in the circulation path to the desk. 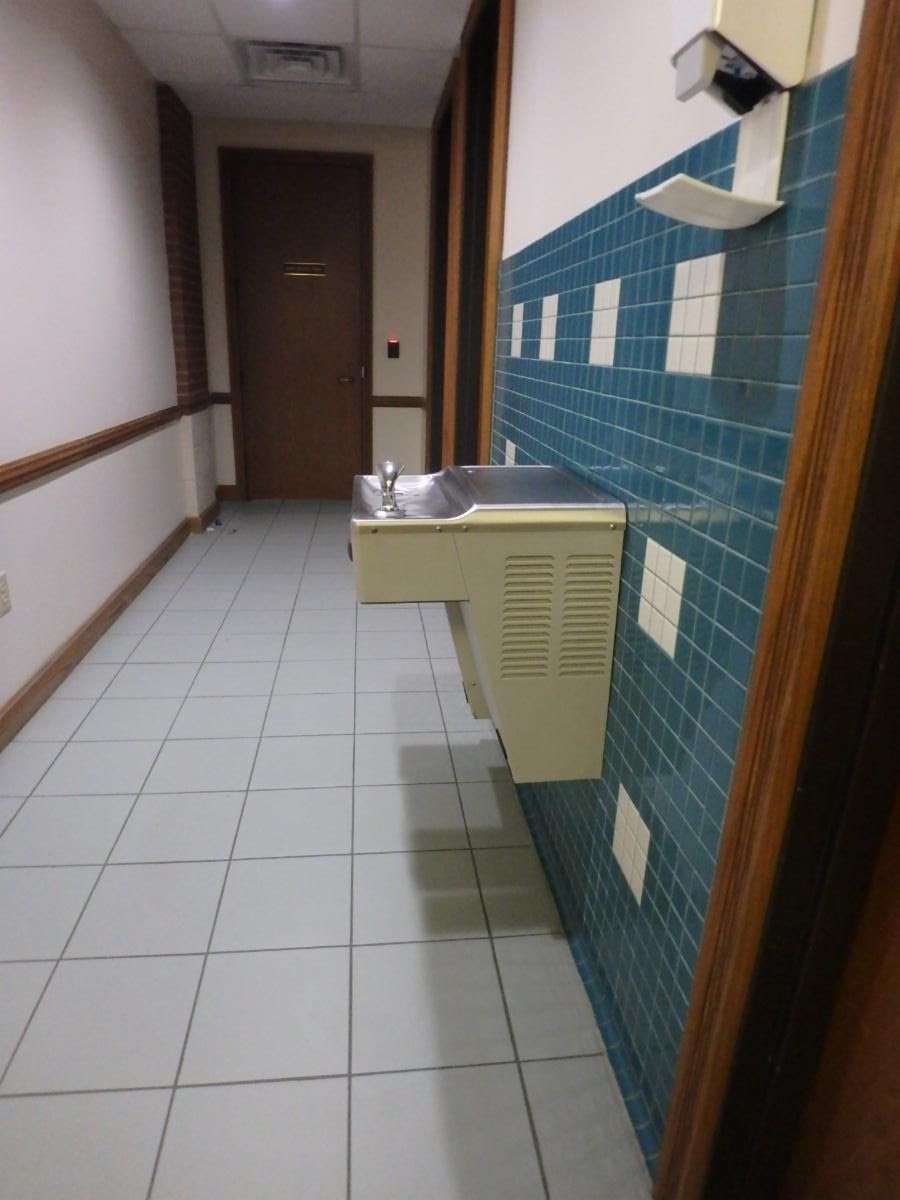 The drinking fountain projects more than 4″ onto the circulation path to the restroom door. 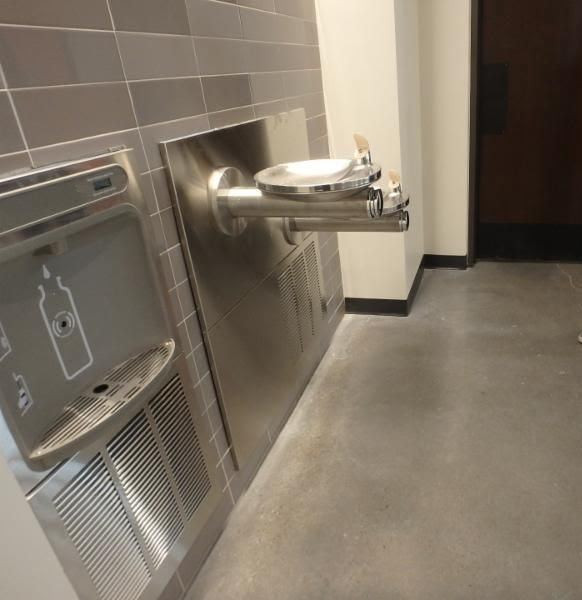 The drinking fountain is located along the circulation path to get to the door beyond.

The circulation path to the lavatory has a hand dryer projecting onto it. 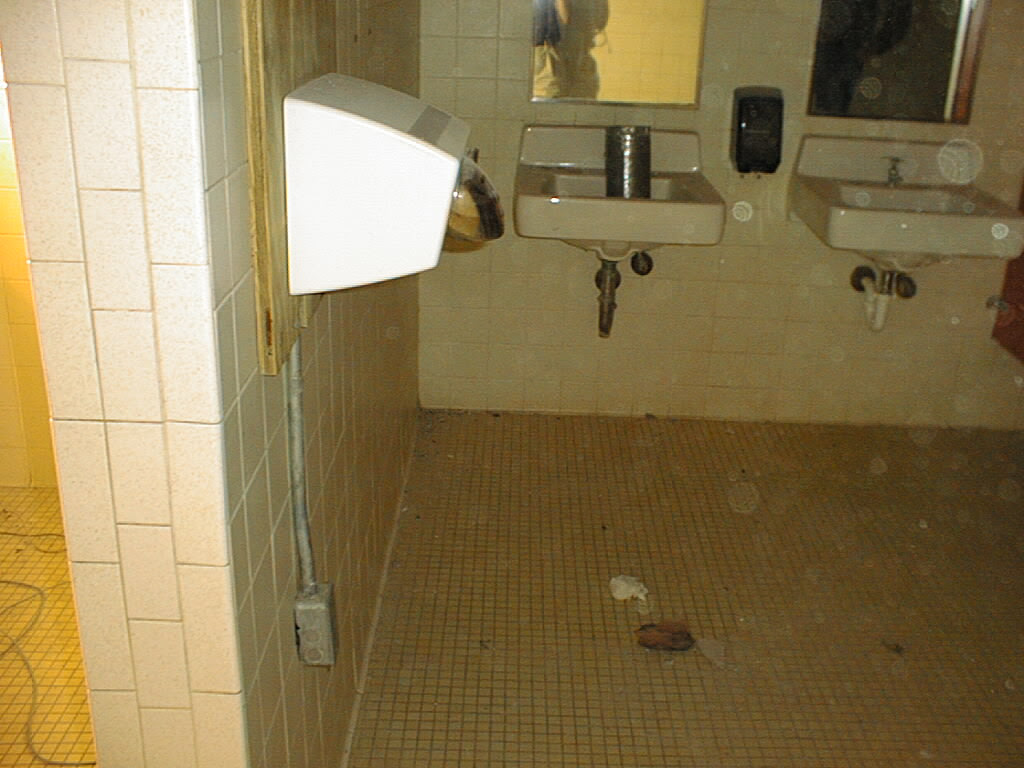 The path to the lavatory is the circulation path.

Any place in a plaza where people walk is part of a circulation path.  The sculpture is located within the circulation path and the angled parts come down to less than 80″ a.f.f. and are considered protruding objects. 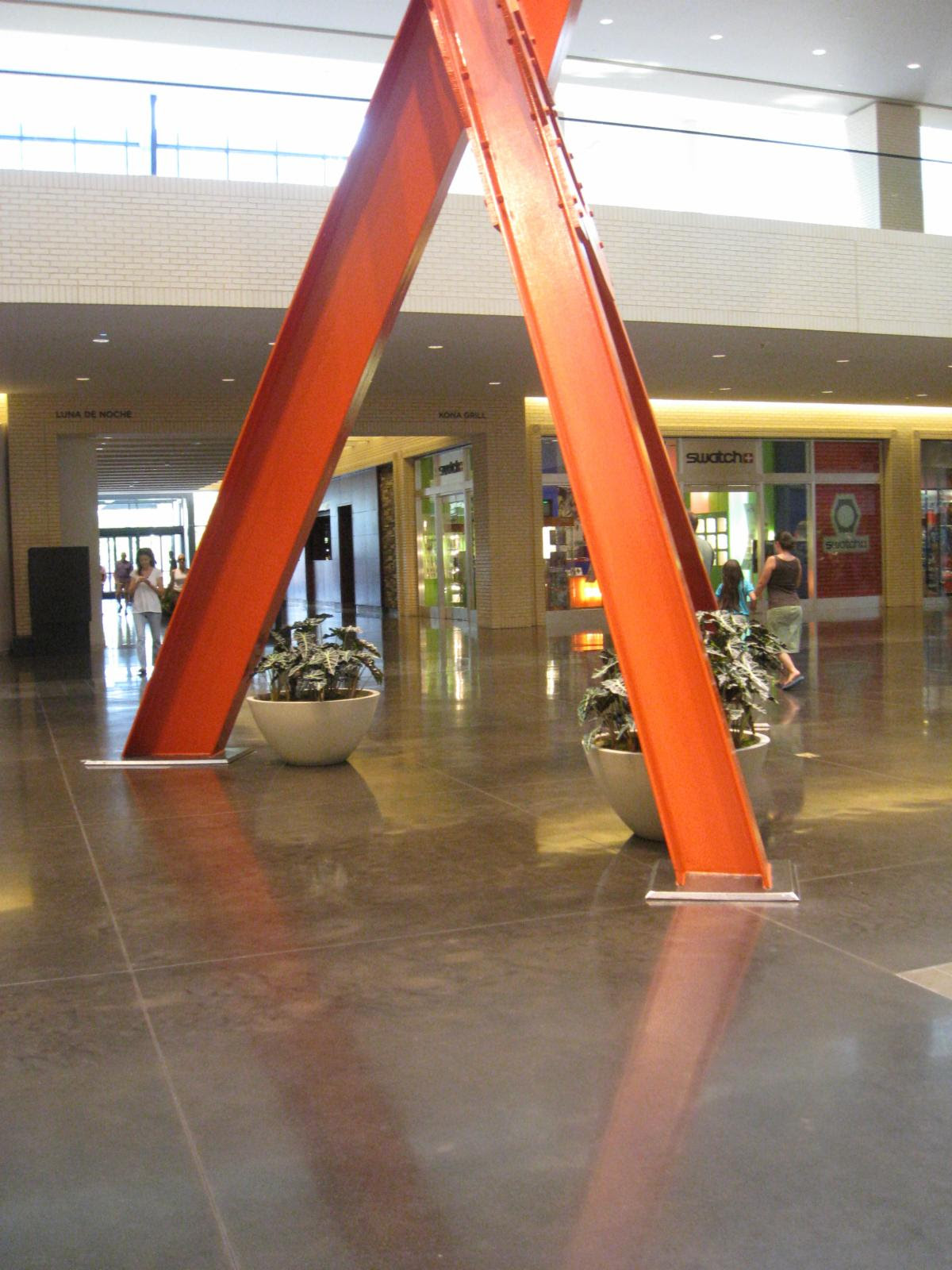 The planters were added at each angle as cane detection.

Clear Widths Along an Accessible Route

About the ADA and TAS. What you might not know?

Showers are not all the same.  There are three types that are described in the ADA standards for showers: transfer showers, roll in showers and alternate roll in showers (which is like a hybrid between the transfer and the roll in shower). Their requirements also vary depending on where they are located.

Below are the requirements in showers, and specifically in a transient lodging facility.

In the ADA Standards under 224 Transient Lodging there is a chart that we use to calculate how many rooms must be accessible. 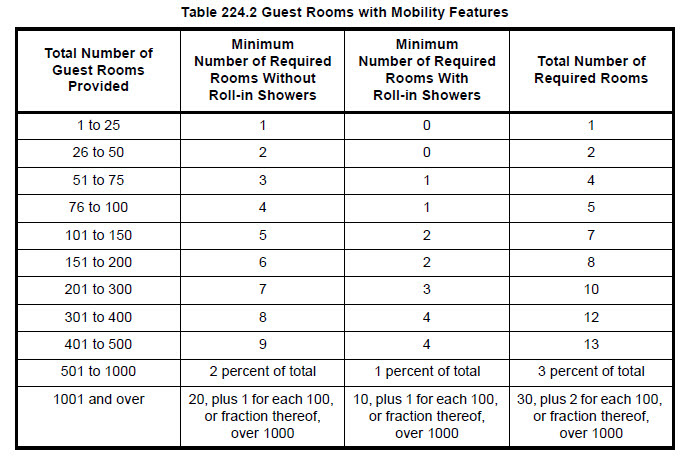 If you notice the chart above, note that if you have less than fifty rooms in a transient lodging facility, then you MUST provide rooms WITHOUT a roll in shower.  So that would mean either a tub or a transfer shower must be provided in a certain number of rooms.  All your bathing facilities cannot be roll- in-showers.

The photos below show you two bathing facilities that are not roll-in-showers: 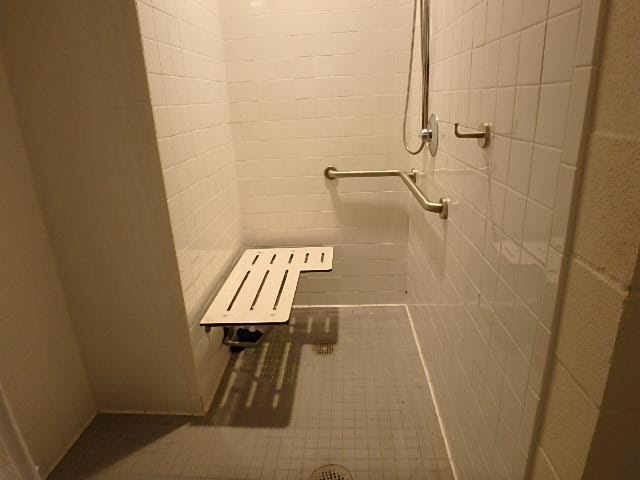 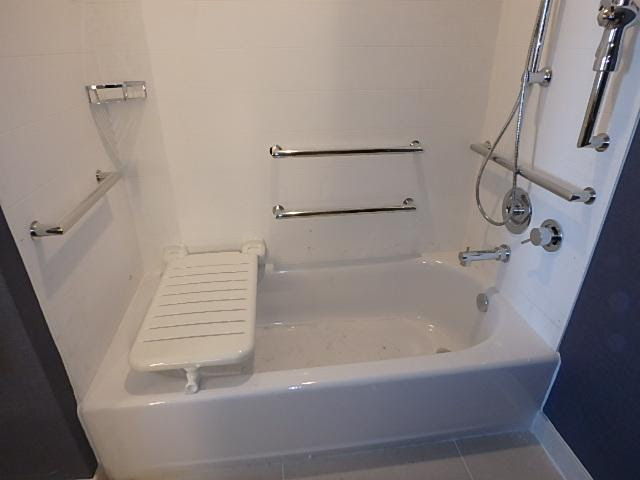 Tub with a fixed and folding seat

If you would like to also provide roll in showers for persons with disabilities you could, but you must first provide the rooms without the roll in showers as stated in the chart. Any additional rooms provided with mobility features beyond the amount on the chart can have a roll in shower. 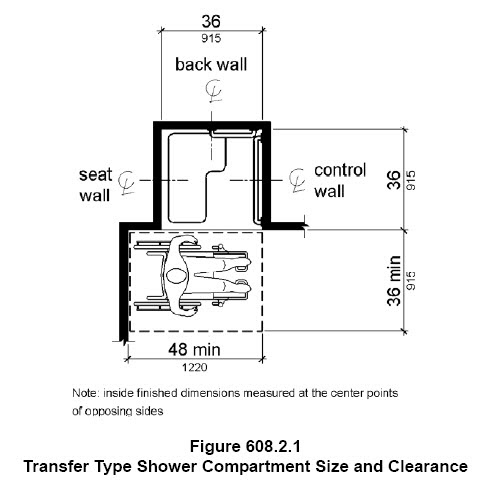 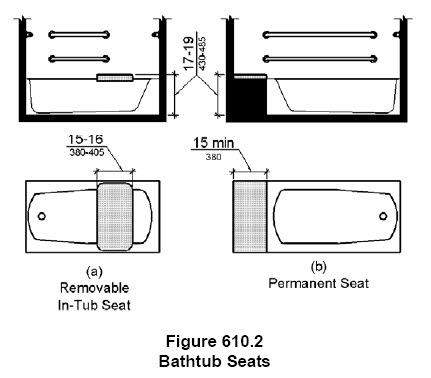 There are also requirements for seats in showers.  In a typical installation that is not located in a transient lodging, the only shower that requires seats are the transfer showers.  If you provide a roll in shower or an alternate roll in shower, having a seat is optional.  If you do provide them then you must locate the shower controls close to the shower seat. 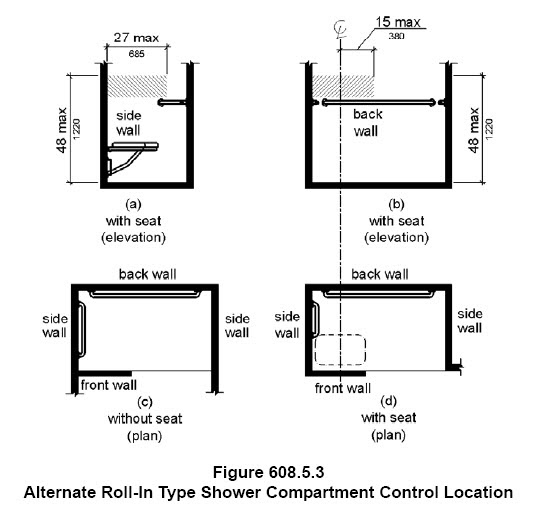 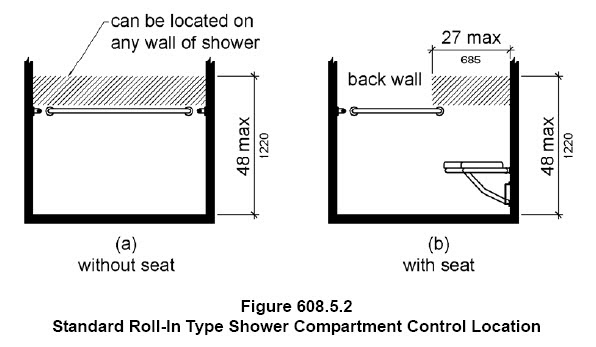 But in a transient lodging you MUST install a shower seat no matter what type of shower you are providing. 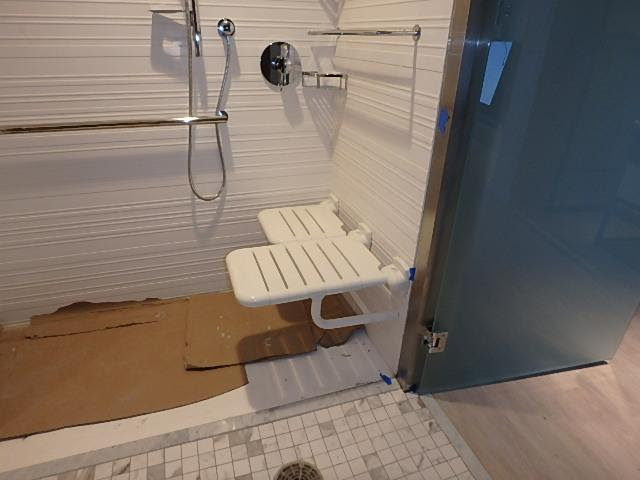 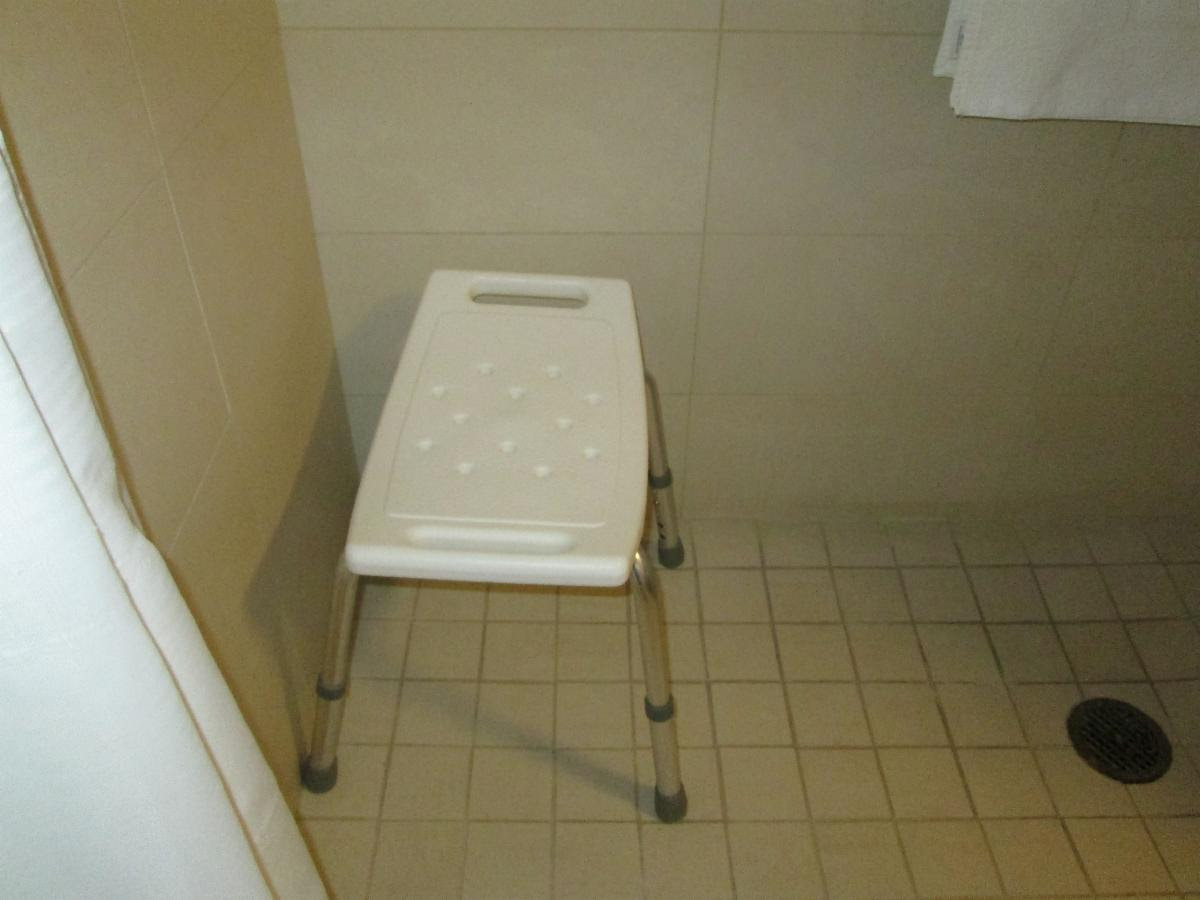 Part of the requirement is that the seat be fixed and either folding or non-folding, EXCEPT in a transient lodging room with a roll in shower.

So what that means is that if you have a roll in shower that is not located in a transient lodging facility you can provide a seat that is fixed but not folding. 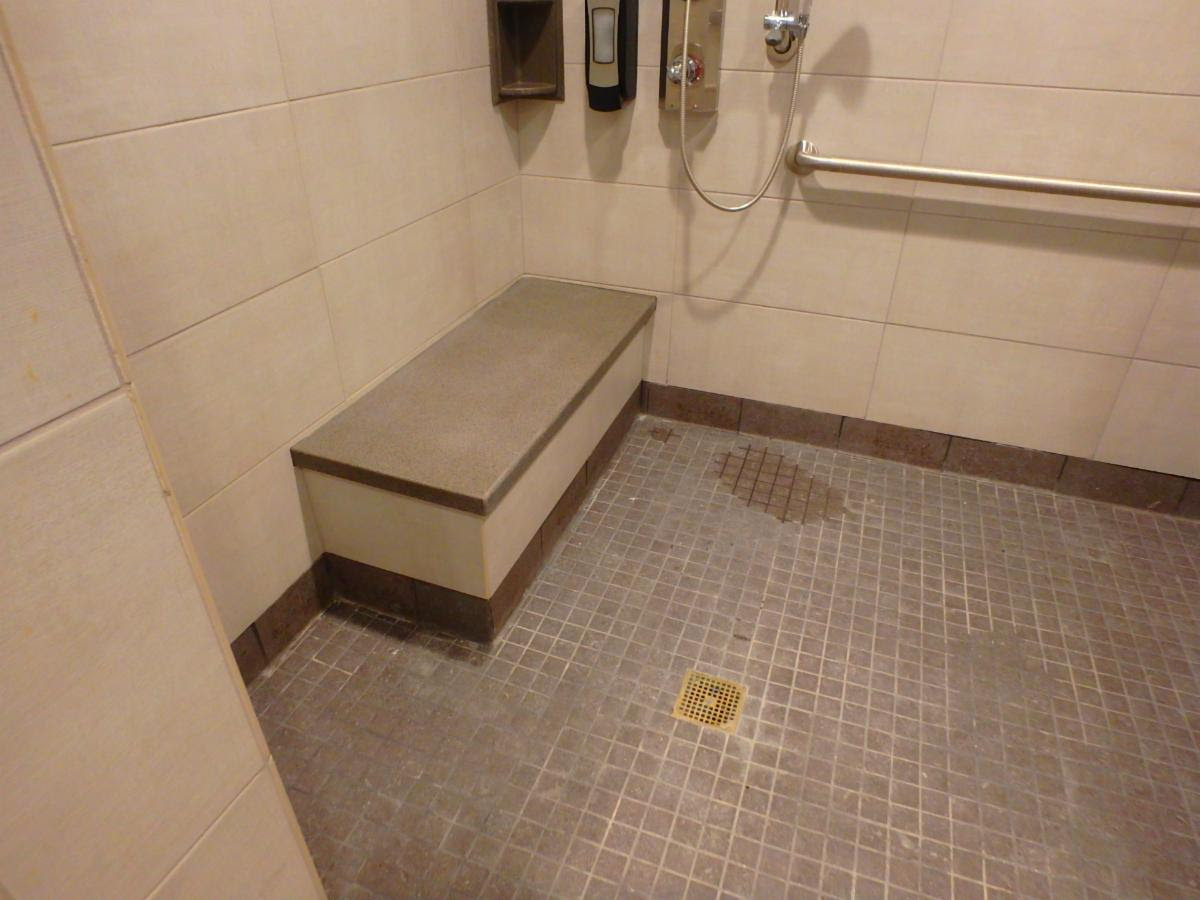 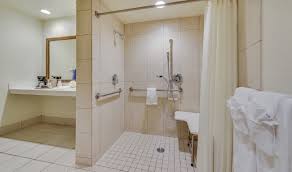 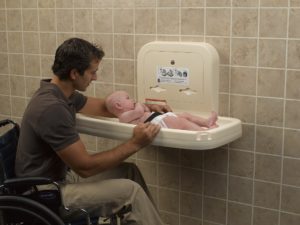 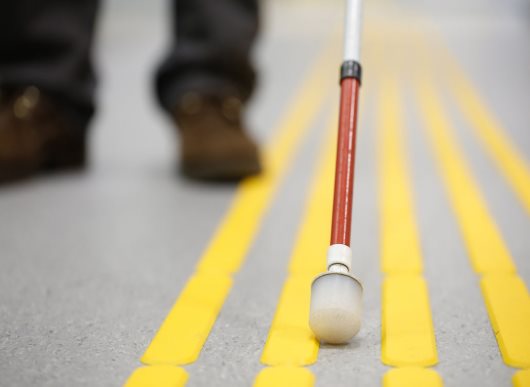 What are Detectable Warnings?