A few years ago, I created a list of tips for designer on how to avoid pit falls when designing for ADA. I am sharing it again, but this time it uses the 2010 ADA Standards as a basis for the advice. Happy New Year and may we continue to eliminate barriers together!

Before you begin your design, make sure you are aware which code you are required to follow based on the City you are designing in. (for example, some Municipalities requires ANSI vs. ADA) Click here to see which Code has been adopted by State.  Remember that you have to use the most stringent between ADA and whatever other code/guidelines your municipality is using.

It is smart to have a checklist so you don’t forget some part of the puzzle.  The ADA has a checklist that you can follow for assessments and design process.  These are for the 1991 ADAAG, but I’m developing one for the 2010 ADA Standards which I will publish soon.  In the mean time, you can use this one to remind you of the pieces.

When given a range, don’t use the lowest or tallest number. Give yourself some tolerances for construction imperfections. For example, a handrail can be between 34″ and 38″, so a 36″ tall handrail is acceptable.

4. GIVE YOURSELF WIGGLE ROOM

When designing toilet rooms, keep in mind what finishes will be on the wall. If the water closet requires a minimum of 60″ of clear floor space and you use ceramic tile, which  is sometimes 3/8″ thick, that can throw off the required clearances making your space a 60″ space around 59″ instead. 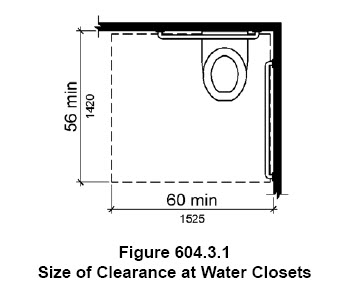 Remember that in a multi-user toilet room, a door cannot swing into the clear floor space of an accessible fixture, but clear floor spaces of fixtures can overlap each other. The door swing can overlap the required turning space. There is an exception in the 2010 ADA for single user restrooms which allows the door to swing into the clearance of a fixture, as long as there is enough room for a 30″ x 48″ space beyond the swing of the door. 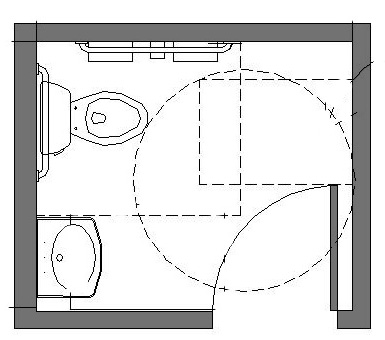 Another way that a door swing can become an issue during design, is if there is not enough maneuvering clearances at the pull side of the door.  Sometimes there is a lavatory (or other elements) that might get in the way making the pull side approach less than 18″  (like the plan above and the photo below).  When designing the restroom keep in mind how deep a fixture will be and adjust the door clearance accordingly. 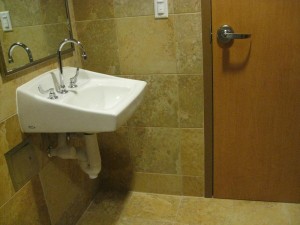 6. KEEP IN MIND THE USERS

When designing storage rooms, keep in mind that if a person in a wheel chair can enter the room and close the door behind them, then they must be able to turn around and go back out. In cases where the storage room is 48″ deep (allowing a wheel chair front access), try to either swing the door in so they can’t close it once they are inside; or create shelving that will make the room shallower and therefore will not create the ability to stay stuck inside.

Most places in a facility that are used by more than one employee at a time, or by patrons or visitors to the facility are required to be accessible and meet the requirements of the Guidelines.  This includes employee non-work areas like storage closets, restrooms, and break rooms.  The mistake I see often is that most people believe that the ADA is only for non-employees (i.e the public).  In reality, common use spaces that are also accessed by employees  must comply. 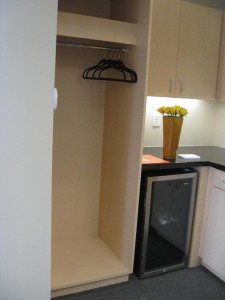 This closet is located in an office. It will be used by multiple employees and possibly visitors and therefore it is a “common use space” and must have a lower rod per the Standards.

Employee work areas only have the requirement to be able to be approached, entered and exited.  Everything else within the work area are exempted.  For example sinks that are in work areas are not required to have knee clearances for wheel chairs. 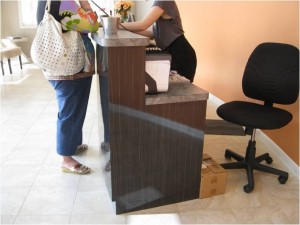 Break rooms or employee restrooms are not considered work areas (they are places where you take a “break” from work), therefore do require the knee clearance.

9. WATCH OUT FOR HAZARDS

The ADA has an advisory that recommends that people should not wheel themselves behind parked cars. When possible, allow for an accessible route in front of the cars. A person in a wheelchair is lower than the driver’s visual range and if they are wheeling behind a parked car, the driver may not see them if they are backing up.

Also, if there are any objects that are along the circulation path that are placed higher than 27″ above the ground, they must not project more than 4″ from the wall into the circulation path.  Visually impaired people will not detect the object and could hurt themselves. 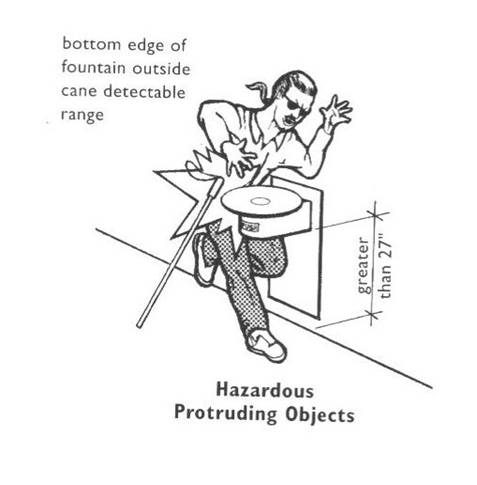 In an alteration of an area containing a primary function the existing accessible route, restrooms, drinking fountains and telephones must be brought up to compliance with ADA.  This is not always part of the scope of work of the remodel, but nevertheless must become part of the total scope if it’s not already compliant.  Remember also, that if they meet the 1991 ADAAG but not the 2010 ADA Standards, they are considered a “safe harbor” and can remain the way they are until they are subsequently renovated.

This drinking fountain allows a user to drink using a parallel approach. This was allowed in the 1991 ADAAG but not allowed in the 2010 Standards. Since they are existing, they are allowed to remain until they get replaced by a newer model. Then they have to meet the new requirements.