Who moved my cheese? Summary of the changes to the ADA

These are excerpts from the Department of Justice Fact Sheets

The Department of Justice (the Department) has amended its regulation implementing title III of the Americans with Disabilities Act (ADA), which applies to public accommodations (private businesses that fall within one of twelve categories established by the statute) and commercial facilities. The ADA requires the Department to publish ADA design standards that are consistent with the guidelines published by the U.S. Architectural and Transportation Barriers Compliance Board (Access Board). Therefore, the title III rule adopts new Standards for Accessible Design that are consistent with the ADA/ABA Accessibility Guidelines developed by the Access Board. The final rule also amends the existing title III regulation to make it consistent with current policies and published guidance, to reflect the Department’s experience since the regulation was first published in 1991, and to address and respond to comments received from the public in response to the Department’s 2008 Notice of Proposed Rulemaking (NPRM).

Adoption of the 2010 ADA Standards for Accessible Design.

The Department has adopted revised ADA design standards that include the relevant chapters of the Access Board’s 2004 ADA/ABA Accessibility Guidelines as modified by specific provisions of this rule. To minimize compliance burdens on entities subject to more than one legal standard, these design standards have been harmonized with the Federal standards implementing the Architectural Barriers Act and with the private sector model codes that are adopted by most States.

The rule includes a general “safe harbor” under which elements in covered facilities that were built or altered in compliance with the 1991 Standards would not be required to be brought into compliance with the 2010 Standards until the elements were subject to a planned alteration. A similar safe harbor applies to elements associated with the “path of travel” to an altered area. 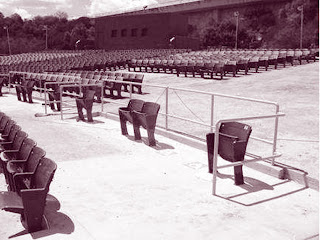 The rule defines “service animal” as a dog that has been individually trained to do work or perform tasks for the benefit of an individual with a disability. The rule states that other animals, whether wild or domestic, do not qualify as service animals. Dogs that are not trained to perform tasks that mitigate the effects of a disability, including dogs that are used purely for emotional support, are not service animals. The final rule also clarifies that individuals with mental disabilities who use service animals that are trained to perform a specific task are protected by the ADA. The rule permits the use of trained miniature horses as alternatives to dogs, subject to certain limitations. To allow flexibility in situations where using a horse would not be appropriate, the final rule does not include miniature horses in the definition of “service animal.” 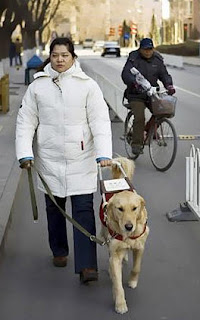 Wheelchairs and Other Power-Driven Mobility Devices. 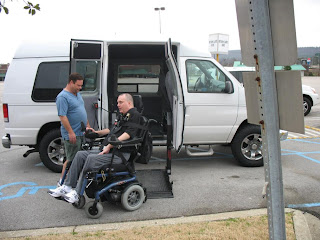 The rule includes video remote interpreting (VRI) services as a kind of auxiliary aid that may be used to provide effective communication. VRI is an interpreting service that uses video conference technology over dedicated lines or wireless technology offering a high-speed, wide-bandwidth video connection that delivers high-quality video images. To ensure that VRI is effective, the Department has established performance standards for VRI and requires training for users of the technology and other involved individuals so that they may quickly and efficiently set up and operate the VRI system.

Reservations Made by Places of Lodging. 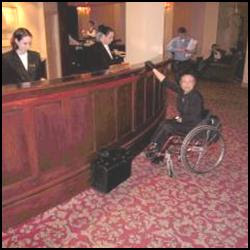 Timeshares, Condominium Hotels, and Other Places of Lodging.

The rule provides that timeshare and condominium properties that operate like hotels are subject to title III, providing guidance about the factors that must be present for a facility that is not an inn, motel, or hotel to qualify as a place of lodging. The final rule limits obligations for units that are not owned or substantially controlled by the public accommodation that operates the place of lodging. Such units are not subject to reservation requirements relating to the “holding back” of accessible units. They are also not subject to barrier removal and alterations requirements if the physical features of the guest room interiors are controlled by their individual owners rather than by a third party operator.