My daughter Linda Hannah chose to write her 2nd grade research paper on Helen Keller!   How wonderful.  I am so proud of her and I wanted to share her report with you.  I typed it since I didn’t have time to scan all her four pages (she only needed to write one page).  Here is her report…enjoy! 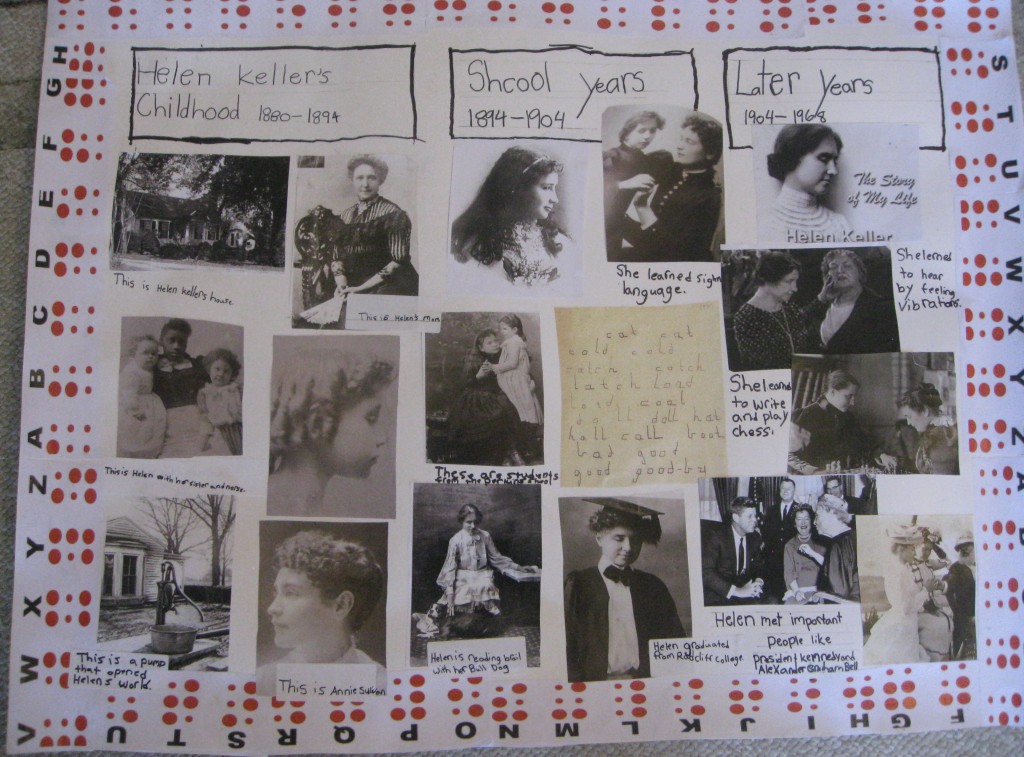 The Story of Helen Keller

Helen Keller was born in Tuscumbia Alabama on September 27, 1880.   At the age of two she got an illness.   The doctor she said she would probably die, but she didn’t.   Instead of dying she was blind and deaf.  She was a very mad and wild girl. She kicked her feet and screamed and ate from people’s plates and didn’t let her mother comb her hair.  Her parents didn’t know what to do, so they went to see Doctor Alexander Graham Bell. He was a doctor of the deaf. He said to call the Perkins School, a school for blind children in Boston. A few weeks later, they got a letter from the Perkins school and they would send a teacher. When the teacher arrived Helen felt footsteps coming up her front porch. At first she thought it was her mother and she reached out her hand. But it wasn’t her mother, it was her teacher. Her teacher pulled her hand, and they went inside. Helen’s teacher was named Annie Sullivan.
At first Annie couldn’t control Helen wildness and temper. But then Annie made her into a better person. At first she taught her sign language.  She gave Hellen a doll and Annie spelled D-O-L-L in Helen’s palm. And then Helen spelled D-O-L-L in Annie’s palm. Then she taught her cake, cat, hat, mat, and many other things. Helen’s parents were too easy on Helen, and she couldn’t learn , so Annie had to talk to Mr. Keller about moving into the backyard house. They took Helen for a long ride so that Helen could think that she was far away from home since she couldn’t see or hear she didn’t know. They arrived to the house and Annie and Helen learned lots of more things. One day Annie and Helen went for a walk. There was a water pump outside and Annie put Helen’s hand under the water pump. Annie started to pump water. Then Annie spelled water and Helen repeated. Then Helen understood everything. She understood that words were the most important things in the world. She wanted to learn more. She felt like she came back alive after being dead. Annie and Helen were so excited, Annie took Helen home and Annie told Mr. and Mrs. Keller the great news. Helen’s parents were excited when they heard the great news. They were very very proud of Helen. Annie wanted Helen to feel free and happy. Helen learned geography by making maps with wet dirt. Helen learned how to read Braille. Helen loved to read. Annie couldn’t teach her enough, so they went to visit the Perkins School for the Blind. Helen went to a real school for the first time of her life. Annie spelled out whatever the teacher was saying. Helen learned to speak by feeling people’s mouths. One of the first sentences she learned to say was “Mother I’m not dumb now”.
By the age of 10 Helen was famous. She had a fund raiser for a blind and deaf orphan named Tommy. She saved $1,600 to send Tommy to the Perkins School for the blind. Helen later wanted to go to college, but her friends thought it would be too hard. Helen did not give up her dream. Helen graduated from Radcliff college. Annie never gave up on Helen, and Helen never gave up on Annie.  Helen helped blind and deaf children by making them feel better about themselves and also taught them how to read Braille. Helen traveled all over the world. She met President Kennedy and received an award for courage from President Kennedy. Helen liked to dance so she joined ballet. Helen made speeches all over the world. Helen wrote five books. Her first book was “The Story of My life”. Helen died in 1968. She was 88 years old. I would give Helen a medal for courage because she was brave because she could not see or hear. She taught the world you could do anything with hard work. I would like to be like her by being smart and brave.