“Let the shameful walls of exclusion come tumbling down”

July is the month in which we as Americans celebrate our independence.  But for the millions of disabled citizens, the date is not July 4, but actually July 26!  On July 26th 1990 the Americans with Disabilities Act (ADA) the world’s first comprehensive civil rights law for people with disabilities was passed.  It was on July 26 that the disabled community won a huge victory in their fight for autonomy and independence.  At the signing of the ADA, President George Bush stated,

“Three weeks ago we celebrated our nation’s Independence Day. Today we’re here to rejoice in and celebrate another ‘independence day,’ one that is long overdue. With today’s signing of the landmark Americans for Disabilities Act, every man, woman, and child with a disability can now pass through once-closed doors into a bright new era of equality, independence, and freedom.” 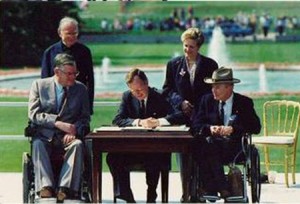 The ADA was created to encourage and promote the rehabilitation of persons with disabilities, to eliminate unnecessary architectural barriers for persons with disabilities, to not restrict the ability to engage in gainful occupation and to not restrict the ability to achieve maximum personal independence.  For many years people that were disabled could not find jobs, shop by themselves, enter government buildings or even go to parks.  Today, 21 years later, it has opened up doors (no pun intended) for many people who would have been otherwise relegated to being at home; being driven around or dependent on others to do all the mundane tasks that we, the abled bodied, take for granted.

The ADA has changed the lives of 52 million Americans who today have a disability.  Prior to 1990, there were only 5% of buses that were accessible to the disabled.  Today 95% of buses are accessible.  Prior to 1990 most building had architectural barriers within them which did not allow the disabled community to access them.  Today all new buildings are required to have accessibility features in place to allow access to all. But we have a long way to go.  Architects and designers are charged to create spaces that are sustainable, that are aesthetically pleasing and to make a difference in our built environment.  But what good is a building that can sustain itself for decades or even centuries if it cannot be accessed by every member of our society?

I feel so lucky that I live in Texas.   Here in Texas we have a program which requires that all newly or altered buildings that have a construction cost greater than $50k needs to be reviewed and inspected by a registered accessibility specialist (RAS).  This means that a designer will have an experienced second pair of eyes who can look over their drawings and advice them on where they might be deficient with their accessibility solutions.  This allows the architects to then relay the comments back to the contractor prior to construction and hopefully the new construction will be accessible. Because of this program, administered by the Texas Department of Licensing and Regulation, Texans with disabilities have a better chance of finding an accessible parking space, accessible curb ramps, accessible entrances, and even accessible restrooms than in most other States in the U.S. who don’t have such programs. 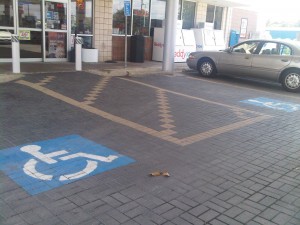 I became one of those Registered Accessibility Specialist in 2001, ten years after the ADA Accessibility Guidelines (ADAAG) was published.  I feel honored and privileged to be part of the design team as their consultant and give them Universal design strategies as well as guidance during construction on how to make their projects more accessible.   Today the ADAAG has changed.  The Department of Justice adopted the Standards for Accessible Design of 2010 (The 2010 Standards).  It has become more streamlined and easier to understand.  They have expanded the scope to include other facilities such as amusement parks, golf course and fishing piers so that the disabled citizens could enjoy their quality of life. 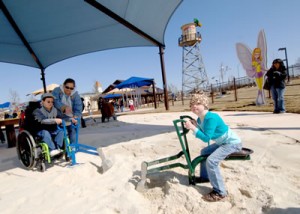 The more I am involved with this part of architecture and design the more proud I am of my choice in profession.  We as architects play an awesome role for the disabled community.  It is through our influence and foresight that they have freedom!  It is with our expertise and advocacy on their behalf that we give them the ability to enjoy the buildings and spaces we design.  It is not only the law that we make these buildings accessible, but it is our duty as the leader of the built environment to do the right thing and focus not only on making our buildings sustainable but livable and usable to all members of  our society regardless of their level of ability.

President George Bush at the signing of the ADA had an emphatic directive—“Let the shameful walls of exclusion finally come tumbling down”— which neatly encapsulated the simple yet long overdue message of the ADA: that millions of Americans with disabilities are full-fledged citizens and as such are entitled to legal protections that ensure them equal opportunity and access to the mainstream of American life.