Being in Limbo is the worst!

I live and work in Texas.  Here in Texas we have a great accessibility program which requires that architects submit any commercial project over $50,000 in construction cost for accessibility  plan review to a Registered Accessibility Specialist (me).  And the building Owner is required to have the project inspected once it is completed.  This is a great way to make sure that the project is compliant with the Texas Accessibility Standards which is equivalent to the ADA.  Most states don’t have this program in place and therefore the buildings have many accessibility errors.

In 2010, the ADAAG changed to the 2010 Standards for Accessible Design.  Many of the requirements from the previous version became a bit less strict.  For example, the new ADA does not require detectable warning at curb ramps (i.e. texture or color), 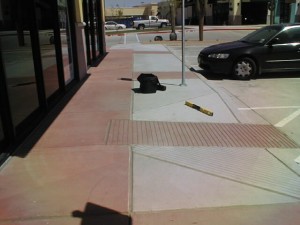 Also another change is a range at accessible signage which allows the signage to be mounted between 48”-60” to the tactile portion of the sign, or a range for the water closets that allow the distance from the wall to is center line to be between 16”-18”. 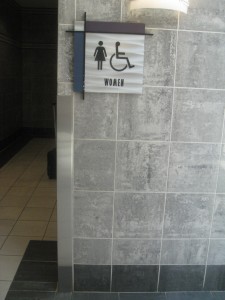 In Texas, the new Texas Accessibility Standards for 2012 have been drafted.  It is just a matter of time before they also become mandatory.  These Standards are almost identical to the new 2010 ADA Standards.  So imagine this.  As an inspector I am told to inspect per the current Texas Standards which have not incorporated these leniencies.  I then find a curb ramp that does not have the proper texture.  Or I find a sign that is mounted lower than the required 60” currently in the books, but are mounted and installed per the NEW Standards.  I know that these requirements will eventually be adopted in Texas.  I know that there is expense in fixing the violations.  But I MUST flag it!  BUMMER!  Being in limbo is such a downer….not being able to apply the current standards that are in the Federal Register because I’m in Texas, but knowing that Texas will soon adopt the new Standards also……WHAT TO DO? WHAT TO DO?…..Even though it frustrates me, I must follow the current Standards because Texas  hasn’t adopted the new ones.  The good thing is that Texas gives the Owner nine months (270 days) to fix any violation, so if they take their time, maybe the law would have changed and they won’t have to fix it.  But that’s a chance they are taking.

There are also several things that are designed and installed correctly per the 1991 Guidelines and the 1994 TAS but do not meet the 2010 Standards or the 2012 TAS.  According to the DOJ they are a “safe harbor”.  This allows these elements to remain as they are and still be compliant.  Texas has not brought the “safe harbor” provision into their Standards.  That is problematic.  It will be interesting to see how they deal with exisiting compliant items.  That will also be frustrating for me.  Even though I am a huge advocate for the disabled community, I am also an architect and can see how hard Owners work to make their spaces accessible in Texas.  All the past work they have done should count.  But again that is for the legislators to decide.  We can express our opinions through TDLR (Texas Department of Licensing and Regulation) where they have posted the draft version of the new Standards.

I can’t wait for this to be resolved.  Not knowing is the worst!