What do I think of the ADA…as an architect? 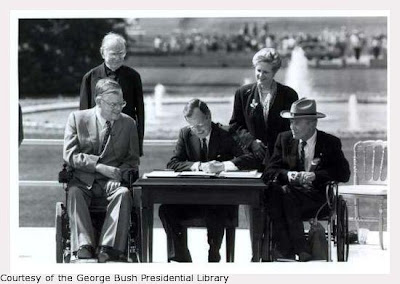 Thank you to Abadi Accessibility News for asking me to weigh in with my opinion as we approach the 20th Anniversary of the Americans with Disabilities Act. My name is Bob Borson and I can typically be found at the helm of my own blog, Life of an Architect .

On July 26, 1990, the Americans with Disabilities Act (ADA) was signed into law by then President George. H. W. Bush. It was a momentous occasion and it would change the lives of millions of people, mostly for the better. So here we are 20 years later, well into living and working with the rules and regulations associated with the ADA, but how are we as architects doing implementing these rules? As architects we are probably doing okay because you can’t work on a project without implementing the requirements of the ADA. For example, this act was signed into law before I even graduated from college so it has existed all of my professional life. That having been said, how are our clients doing with it and are we helping them?

On occasion, when I tell people that some portion of their project doesn’t currently meet code or when I try and explain why the bathrooms are as large as I have shown them, I get puzzled, sometimes irritated responses:

Client: “I was in a restaurant the other day and their toilet room wasn’t anywhere near this big.”
Me: “Well that doesn’t make it right, besides, it is possible that their toilet rooms were permitted before ADA was a requirement.”
Client: “And why is that space behind the cashier so large – make it smaller..”
Me: “I can’t, that is another ADA requirement. Someone who works back there might be in a wheelchair and they need to be able to turn around and maneuver properly.”
Client: “It’s too big, I just won’t hire someone in a wheelchair.”
Me: “It’s not called the Americans in Wheelchairs Act, there are other disabilities. You do realize that you are now practicing a type of discrimination and trying to break a federal law?”
Client: “No one else seems to have to do it…now whose being discriminated against?”
I am embarrassed to have to say that I have had this exact conversation or some form just like it several times and I am always shocked that people don’t even realize that they are practicing discrimination. I like to think I have smart clients but I have had a few tell me (after I pointed out what they were asking for) tell me that they don’t discriminate, that they like people from all races and backgrounds.
Errr…that would be racism and something entirely different. Holy gorilla’s armpit – you have got to be kidding me………
I have to be honest with you, I mostly do residential work and my knowledge of the intricacies of the rules and regulations associated with the ADA are pedestrian at best. I can handle looking things up in the rule book and coming to my own conclusions but what it really comes down to is having a Registered Accessibility Specialist, or RAS, who is there to help guide you. When I start a project, and I try to sit down with all the people who will be working with me and I have a conversation about how we are all on the same team and that we all have the same goals. See, the very nature of how most contracts are set up, adversarial relationships between architect and contractor are established from the very beginning. Another relationship that can be a bit…well maybe not adversarial but difficult at times is between the architect and their RAS. Sometimes, and I mean this with begrudging respect, RAS tend to be rule followers of the highest order. This “rule following” mentality can actually serve the architect well when trying to navigate the labyrinth that is the ADA rulebook. But I am not interested in just rule followers, I want my RAS to interpret how the rules might actually apply specifically to my project. And that’s where my particular RAS consultant specialist comes in.
When I was asked to write this post, I was more than happy to do it. The type of RAS consultant I like to work with typically has an architectural background. Having a RAS who thinks like an architect while interpreting the rules and regulations associated with ADA, brings me that much closer to achieving a successful project while getting everyone working on the project on the same side and with the same ultimate goal. I don’t think that some people think about the type of role that a RAS can perform – if you get the right one. It is my intention to go beyond just “doing the right thing”, disabled persons should have their actions and challenges taken into consideration. Trying to be a rule breaker, or even a rule bender, holds no allure for me as a architect and designer. But just as I have to interpret the projects programs, I want a RAS consultant who will help me work within the guidelines established and to achieve all our common goals – a happy client. Incorporating ADA requirements into your projects is an indication on how far we as a society have come, how inclusive we can be. It should be more about what we can do, not what we have to do.