Removing the barriers from your home…..

A client called me to help her renovate her house because her mother was coming to live with her. Her mother suffers from Multiple Sclorosis and uses a wheel chair. The challenge was how to upgrade her entire house to make it possible for her independent mother to move around without her daughter’s help, and also not break the family’s budget. We decided to use the seven principals of  Universal Design to assist.

The first thing we had to do was figure out a way to get her into the house. She lived in a slightly sloped site which had two steps up to the doorway and the main floor was 6” above the porch. We had to create ramp and also keep water from draining into the house since the porch and the main floor would be on the same level. Since steps already existed, and they had a large front yard, we were able to create a nice ramp out of stained concrete that worked with their landscape. 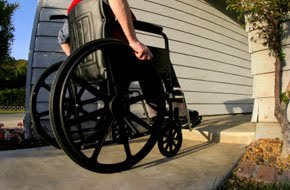 Once we were in the house there were two other barriers to remove: the kitchen and her bathroom. The bathroom was not that difficult. There was enough room for her to move around (typically 5’ turning diameter of area on the floor), but we had to enlarge the door to 36” for her mother to wheel herself in. We added grab bars and a seat at the bathtub. We also had to provide some grab bars at the toilet. And we had to change the faucet and sink with one she could readily reach and wheel herself under. We had some manufacturers, like Great Grabz that we recommended that would not be too expensive, yet make their bathroom a nice space. 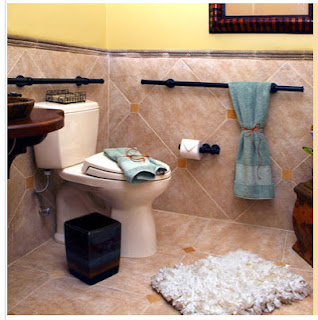 Photo Courtesy of Great Grabz Inc.
(this photo shows a rug in front of the toilet, which would not be a good universal design or accessible accessory for the bathroom because a wheelchair could not easily maneuver through it)

In the kitchen, where we had the most challenges, we decided to spend a bit more money. We could have left all the cabinets in place and just replaced the sink area where her mother could wheel herself under it. But that would only solve half of the problem. She would still need help reaching items above her reach range. What we did was a part of the kitchen cabinets were replaced with a brand new type of system called “adjustable cabinets”. With a push of a button, the entire upper cabinets were lowered for ease of reach, and then would go back up to their original position. The sink was also changed as we did in the bathroom. The appliances were left as is, but we might go back and replace them with easier to use and easier to reach products. At the end of our transformation, both the client and her mother were happy with the result. 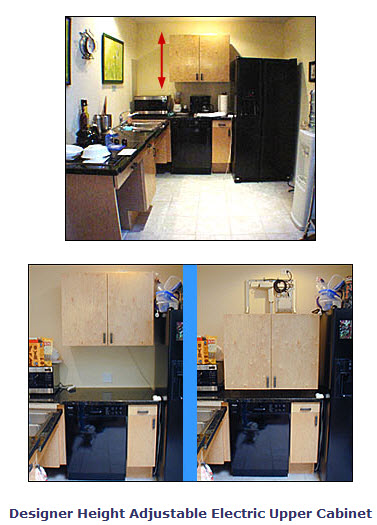 There are around 30 million of Americans that are restricted by a wheel chairs or walkers. This causes challenges for them to move around in their own home. The number of people with disabilities is expected to grow to 50 million by the year 2020. Removing architectural barriers is one way to make it possible for people to feel a sense of independence and comfort while still living with their physical impediments. Removing architectural barriers is a team effort, from the client, the architect, and the manufacturers that make the products. This team has a long road ahead to remove all architectural barriers from our buildings, but we are definitely way on our way.