There is a new section in the ADA Standards which deals with all types of recreation and sports facilities.  Some examples of these are amusement parks, sports like bowling, arcades, swimming pools, mini-golf , and play area just to mention a few.

This newsletter will focus on the type of facilities like an all inclusive arcade for children and adults that have bowling, arcades, and other games like laser tag and even rock climbing.  These facilities will probably also have dining areas and service areas which have been explained in other newsletters.

Are arcade games required to be accessible?

Only elements in a facility that are “fixed” or “built-in” are subject to the requirements for accessibiltiy under Title III.  Furnishings and equipment that are not permanent will not be subject and do not have to comply.

This applies to arcade games such as pinball machines, video games, pool tables, air hockey and the like.  In an arcade, the games are not required to be accessible, but an accessible route to them should be provided.  This is similar to the requirements in an exercise or fitness room where a route to the equipment and also a clear floor space next to each type of equipment should be provided. 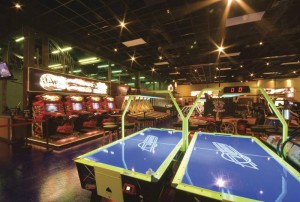 Other games such as laser tag, sand volley-ball, or even rock climbing are considered “area of sport activity”.  The areas of sport activity according to the 2010 ADA Standards are exempted from certain requirements, such as changes in level inside the area, type of flooring, and protruding objects within the area.  The Standards advises that an accessible route up to the activity be provided.  The interior of the court or sport activity area itself is not required to fully comply. Therefore, a route up to the laser tag entrance is required, but the course itself is not required to comply. 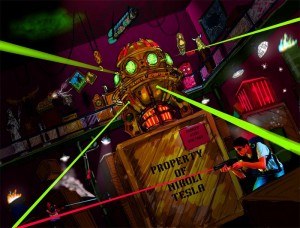 What games in an recreational facility have to be accessible?

Even though most of the games within the recreational facility/arcade might be considered either equipment or areas of sport activity, there are a few type of games that are scoped in the ADA.  Some examples are mini-golf, bowling, and play areas (even the elevated play areas found on the interior of some facilities).

a) 50% of the holes should be accessible and consecutive

c) Areas within holes where golf balls rest shall be within 36″ max of the clear floor space so the golf club can reach it. 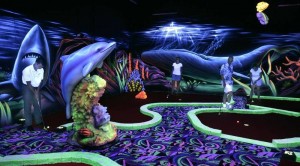 Bowling alleys are not excempted and are subject.  Section 206.2.11 states “Where bowling lanes are provided, at least 5% but no fewer than one of each type of bowling lane, shall be on an accessible route” 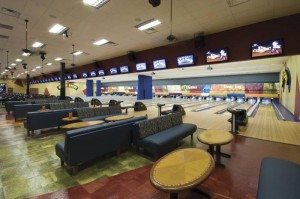 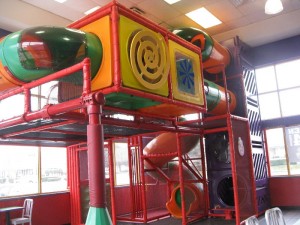 TDLR just issued 9 new Technical Memoradum that explain the vague areas of the Standards.  These only apply to the Texas Accessibilty Standards, but might be useful in other States, when they are clarifying technical standards that are also found in the 2010 ADA Standards chapters 3-10.  These are only clarifications and do not constitute a change to the compliance requirements.  Here is the list:

Below are some upcoming seminars where I’ll be teaching for AIA approved CEU:

June 13th: 4 hr Understanding the 2010 ADA for SSTL Code– Class is Full but check for other dates on her website

November 7: TSA Convention in Ft. Worth

Announcing the release of our second book: “Applying the ADA” published by Wiley.  It is available for sale now. .  Congratulations to Daniel Steenstra from HGA Mid-Atlantic LLC in Alexandria Virginia who won a copy of my book in honor of Architecture Month in April! 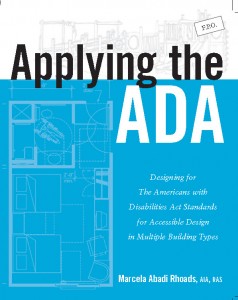 If you have any questions about these or any other topics, please feel free to contact me anytime.
Marcela Abadi Rhoads, RAS #240
Abadi Accessibility
214. 403.8714
marhoads@abadiaccess.com
www.abadiaccess.com