Is the accessibility of your business good business?

This guest blog is brought to you by my friend William J. Martin, WJM Architect (photo credit Mike Pollio).  I met William on Twitter and have been following his amazing work for over two years.  He is amazing and I’m grateful and flattered that he decided to write a blog post for our site.  Enjoy!

What prevents businesses from making the changes that make their businesses handicap accessible has many parts. Many business owners tell me it’s about money and construction cost — a big investment without any financial return.  I do understand that no one likes to spend money on things they don’t believe necessary to operate their business, but what if it turns out to be good business?

Sometimes events occur that help to illustrate the value of consulting with an accessibility design professional to bring your business into compliance with the  accessibility codes and the Americans with Disabilities Act (ADA) requirements.

I recently had a project that involved ADA upgrades to a long established restaurant.  This particular project was not that much different than many of the other projects that I had designed in the past, with one exception…. It was severely damaged by fire and was over 140 years old.  It was damaged,  but not destroyed.  The beloved building would be repaired and rebuilt. 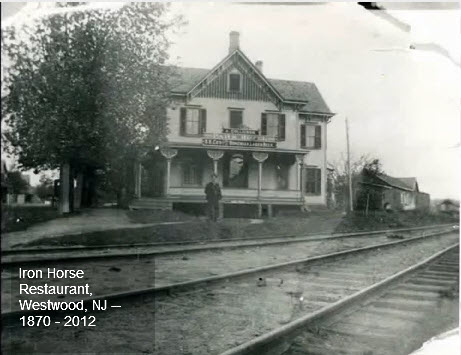 Whenever there is a fire in a building, it is a tragedy.  If the building is 140 years old and has a fire, it is a serious tragedy.  Buildings like that are vital to the heritage of their community.  Having something as permanent as a beloved local building damaged by fire can be extremely unsettling for many people.

My client called me the day after the fire and said “This building is 140 years old, we have been here for 40 years, we just had a severe fire.   You have to help me!”

After I saw the damage and got over my personal shock, I comforted the owners, “don’t worry,” I said, “the structural damage can be repaired.”  I then began to contemplate the task at hand.  My client would have loved to blink his eyes and have everything put back exactly as it was before the fire.  However, the extent of the damage was more than sufficient to require building code upgrades, including  accessibility upgrades.  The multilevel interior dining rooms would have to change.  Toilet facilities would have to be addressed. 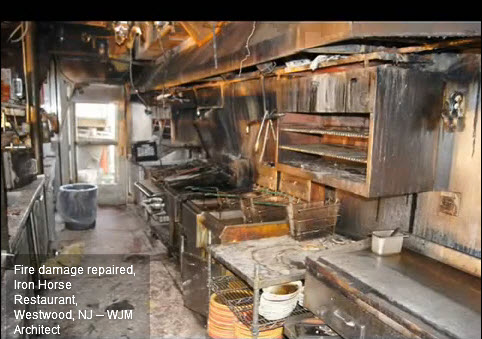 After assisting in obtaining the cleanup and selective demolition permit, the very next thing I did was to prepare a comprehensive building code analysis to identify the exact upgrades that would be required based on the extent of the damage.  This had to be done first, since it affected the overall approach to the fire damage repair and rebuild design work.  I met with the building officials and had them review and sign off on the code analysis and required upgrades.  This way I had a clear and unchanging set of requirements specific to this project.  The full extent of required upgrades were established and I could now begin the redesign work.

With significant concern in his eyes my client said… ”I can’t lose paying customer tables and seats for ramps and toilets that I did not have before the fire.  You have to help me!  I assured him I would do the very best I could to resolve all issues and get the restaurant open as soon as possible.  His response was direct, “If it was so easy, don’t you think I would have made those handicap changes already.” [Note: we prefer the word accessible rather than handicap]

This was a normal reaction from a very savvy businessman assessing a difficult situation.  For an accessibility design professional , this was a design problem to be solved.

Armed with my ADA/ANSI code analysis, I began to look for solutions.  The dining rooms were 2 steps up and down from one another.   It seemed like there were steps everywhere.  The ladies toilet rooms were on the second floor, a full flight of stairs up from the dining rooms.  The mens toilet room was actually 2 small individual toilet rooms just off the dining room.  The 140 year old wood framed building had been a Victorian house, a hotel, rooming house, bar, and finally, most recently, the fire damaged restaurant.

Built right up to the street line, there was no front yard for any kind of ramp.

The main building had long ago been connected and combined with the buildings next door. These connected buildings were why every floor was at a different level.  They were built as separate buildings and combined later into the dining rooms, kitchen and bar of the restaurant.

The old connected storefront was previously converted into an emergency exit and alarmed to prevent casual use.  Even though there was a step to the doorway, the recess of the storefront allowed for a ramp to meet the sidewalk.  There was my new accessible entry.  The four steps up at the existing traditional entry could remain as I designed this entry adjacent to serve as a new ramped entry.  There were no tables allowed in front of this emergency exit, so no tables and chairs were affected by this change.

Next the dining room levels had to be addressed.  I could get a ramp in from outside, but now I had to find an accessible route within the space.  The 14 inch difference between floor levels meant a 14 foot long ramp in the dining rooms with landing space, railings, turning clearances, etc.  This would certainly affect tables and chairs in the dining rooms and this was what my client felt was devastating to his restaurant seat count.  I began to get a headache. 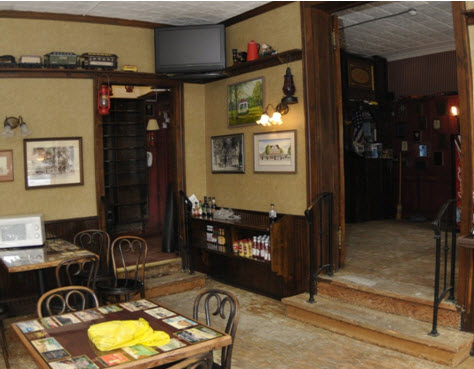 Instead of a single 14 foot long ramp, I designed two 7 foot ramp sections — one in each dining room using these existing hallways.  The two ramps met at a new mid level where I created a comfortable landing with proper turning radius.  Kitchen entry was shifted over slightly.  The fire had begun in the kitchen and this doorway move could be done easily during the kitchen redesign. 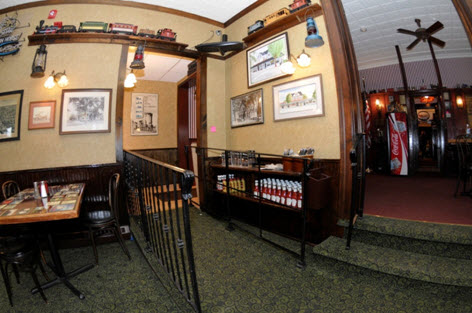 Adjacent to the new ramp landing  space was a large storage closet where beverages were dispensed and glasses stored.  I relocated the beverage function into the new efficient commercial kitchen design and used this closet space for a unisex accessible toilet room. 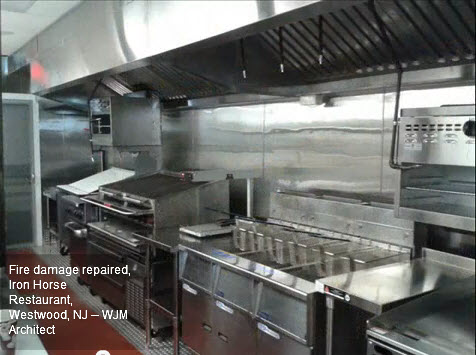 I aligned the toilet room floor at the new landing mid level, with the door to the toilet room opening off the ramp landing.  There was proper clearance for the ramps, turning, handrails, and the required toilet room door approach clearances.  The closet interior was slightly larger than was needed for the a compliant toilet room.

I now had the interior accessible route connecting the dining room levels and the required unisex handicap toilet room.  This was accomplished without displacing a single customer seat.

After I confirmed all of the many overlapping ADA clearance requirements, I grabbed my sketch and met with the owner to explain how it would work.  At first he could not believe it.  The ramps were much shorter than he was told would be necessary.  When I explained the new mid level between the two ramps, his eyes grew big as he realized that it was possible after all.

Nearly any building can be made accessible, it’s really a matter of architectural creativity and open minded problem solving.

The fire damaged restaurant, with the handicap accessibility changes, was completed and re-opened.  Like any beloved neighborhood business, the outpouring of public support resulted in increased business in the weeks and months since the re-opening.

I suggested to the owner that they include in their advertising a few words about the new  accessible features.  The result has been a sustained increase in their business. Able bodied people now bring disabled relatives to eat.  More elderly patrons, many with only minor mobility issues, now flock in groups to enjoy the best burgers around.  Some people come just to see the inside of the 140 year old building.  They never thought they would be able move freely between the levels and now they come just because they can.

In the end my client told me the changes that were made, made good business sense.  People who had difficulty entering the restaurant because of the front steps now come to dine and bring with them their families and friends AND their dollars…

Accessibility professionals know that making your business  accessible isn’t just part of the building code, it’s good for your business.

Over the years I have assisted businesses and witnessed them benefit substantially from handicap accessible modifications made to their buildings, especially service businesses.

Accessibility for all is good business.