Americans love to travel.  Travelling gives us the freedom to go to different destinations and experience different places.  People with disabilities also travel, and as such, the airports must be accessible.  For designers and airport operators, it is sometimes confusing what accessibility guidelines should be followed.

Under Part 382 of the Air Carrier Access Act (ACAA), air carriers are responsible for airport facilities or services that they “own, lease, operate, or otherwise control. The facilities, according the ACAA should follow the ADA Title III in those areas that are considered public accommodations and commercial areas.

Although the ADA’s statutory language exempts transportation “by aircraft:, airport terminals owned and operated by government entities are covered by Title II of the ADA which requires that the services are made available, and airport terminals open to the public are “public accommodation” covered by Title III of the ADA which requires building access. Both are subject to ADA access requirements of the Americans with Disabilities Act Accessibility Guidelines (ADAAG).

This newsletter will try to explain what those regulations.

Ticket counters and information desks outside the secured area fall under the ADA section 904 and possibly 902 since they are a public accommodation.  Section 904 discusses service and sales counters.  If the ticket counters are used for selling tickets or to provide some type of service, such as information, getting boarding passes, or checking in bags, those counters will require that a portion of the public side of the counter be no higher than 36″ a.f.f., and no shorter than 36″ in length.  A parallel or forward approach is allowed. 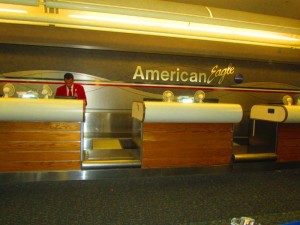 This ticket counter does not have a portion at 36″ a.f.f. , although the area where the baggage is turned in is open and lower.  It could be argued that the entire counter is part of the work area for the ticket agent, but in reality it is also where a customer approaches the ticket counter to receive their boarding pass or baggage claim stubs. This is not a compliant service counter.

This ticket counter has a shallow counter that is at 36″ a.f.f. which was allowed by the 1991 ADAAG and it is a safe harbor, but a person with disabilities will have difficulty communicating with the ticket agent since the ticket counter is higher than 36″ a.f.f.

More and more you find that self service check in are being offered.  A passenger will not approach a ticket counter but a self service kiosk.  These should be within reach range per section 308 of the ADA.  There are other requirements that these might need for people that are visually impaired. 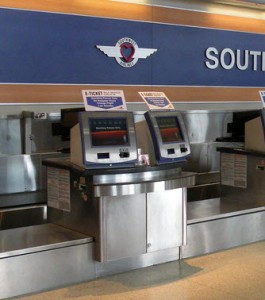 Self-service kiosk systems clearly fall within the ACAA encompassing language, which incorporates the Americans with Disabilities Act (ADA) Title III standard for accessible design.  This means that these kiosks should meet the reach ranges specified by the ADA but in addition it should have similar privacy requirements as the ATMs do. The kiosks should have the ability to communicate with the visually impaired as well s the hearing impaired patrons.  This is not yet happening, but the industry is aware of the deficiency and will hopefully act on that in the near future. 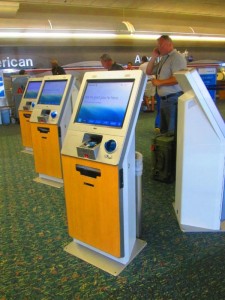 In the same area as the ticket counter there might be counters for filling out baggage tags.  These would fall under the ADA Section 902.  5% of the counters must be accessible and have a forward approach.  They should be no higher than 34″ a.f.f and they should have a knee space complying with ADA section 306 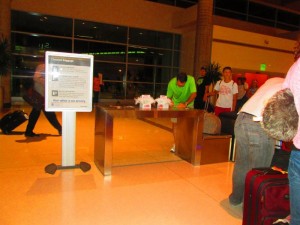 Other areas of the airport might have information counters.  Those will fall under the service counters of ADA Section 904.  They should also have a portion at 36″ a.f.f. so that a passenger can communicate with the person behind the counter.  According to 904.4 the accessible portion of the counter top shall extend the same depth as the sales or service counter top.  Therefore a separate counter attached to the front of the service counter may not be used. 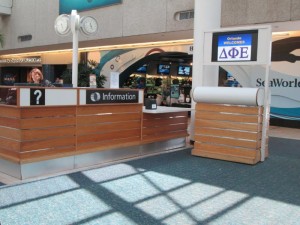 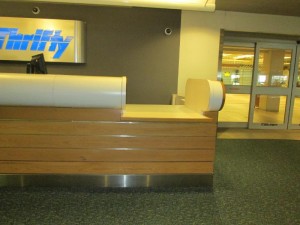 Once a passenger passes through security and is at their gate, the counters at the gate are also required to follow ADA section 904.  The counter shown on the picture below followed the 1991 ADAAG which allowed a separate counter to be used which was not the same depth as the service counter itself.  Like we explained above, these separate counters are difficult for persons with disabilities because they cannot easily community with the agent behind the taller counter.  That is why the 2010 ADA Standards requires that a lower counter which is the same depth as the main counter be provided. 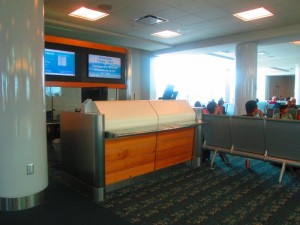 At the gate, sometimes the air carriers offer tables for people to use which they wait for their plane to board.  These would fall under ADA Section 902 as a non-employee work surface.  These should have a portion of the counter at 34″ a.f.f. maximum and have a knee space per section 306. 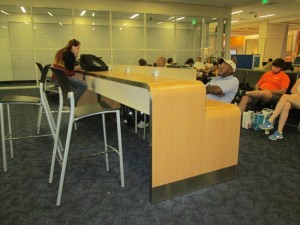 If there are power outlets located at the counter, those should be within reach range. 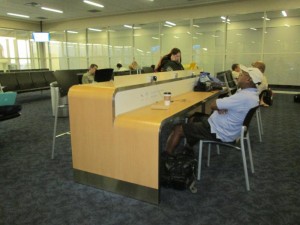 At the terminal gate, passengers go through a door and enter the Jet bridge. This is essentially a movable piece of equipment which allows passenger to board the plane. This is technically not part of the airport and will not fall under the ADA. The requirements for the jet bridge, the slope, handrails etc. will be found in the ACAA. Same with the requirements for inside the airplane. People with disabilities do not enter the plane on their own. There are procedures that air carriers follow with all their passengers with disabilities. 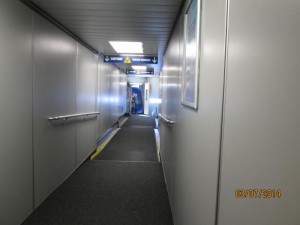 We are celebrating our 10th year of service to the building industry as a Registered Accessibility Specialist!  Mention this newsletter and receive 10% off your next review or inspection.

If you want to learn more about these standards, be sure to check out my books:

“Applying the ADA” published by Wiley.

They are available for sale now. (also available as an e-book)