I traveled to Cancun for my cousin’s wedding this past week.  My husband and I flew in and I, in good nerdy fashion,  started looking for accessible elements.   I was pleasantly surprised that Cancun attempted to be accessible much more than other places in Mexico and South America that I’ve been to.  I’m assuming that it is because it is such a tourist town and there were some disabled visitors that I saw.  There were many accessible elements that were provided and some spaces that were  designated as accessible.  Most of the time, their attempts at making spaces accessible  succeeded.  But of course, there is no Mexicans with Disabilities Act there, and  although they had good intentions, it doesn’t quite get there. 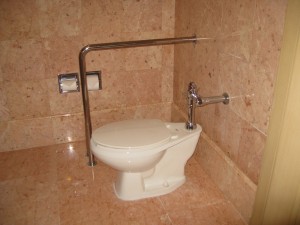 The accessible restroom had a side grab bar, but no rear grab bars.  Also the lenghts for the side grab bar was not long enough for persons that use wheelchairs to transfer onto the water closet.  They sure were very nice and spacious though! 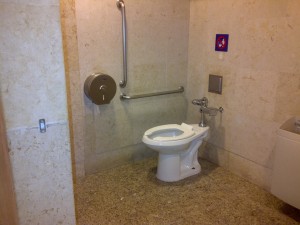 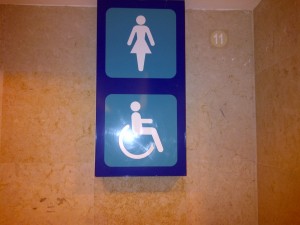 The signage designated the wheel chair accessible restroom, but it did not provide Braille for persons with visual disabilities. 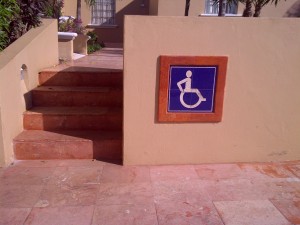 The sign with the universal symbol of accessiblity was located adjacent to steps.  But it was directing persons with disabilities to a ramp that was a bit further down. 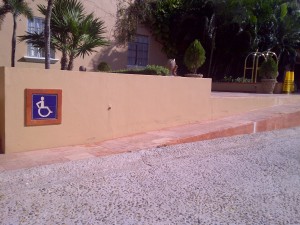 This ramp is adjacent to a parking space that is probably meant for the person with disabilities.  Unfortunately, there is a 6″ curb up to the sidewalk where the ramp is located and there is no access from the parking space up to the sidewalk.  The ramp itself is a big problem.  It is 36″ wide, it does not have any handrails, and there is not edge protection.  I would be nervous to use it if I was in a wheelchair (if I could even use it).

Even the accessibility symbol is a bit different than the one’s we have in the US.  I attended the Texas Society of Architects convention this past October where the President of the Rhode Island School of Design, John Maeda, was presenting the key note address.  He presented (among other things) Exit signs from around the world.  It made me think about the fact that the Universal Accessibility Symbol is not quite univeral, or at least it is not homogenous.  What does the symbol in Mexico say? 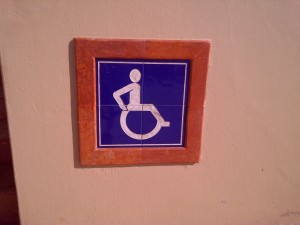 This one is the one in Cancun

This one is one used in the USA

Very similar, but their arms are in different location.  It almost looks like Mexicans are still “moving” toward accessibility.

Kudos to Cancun.  Even though not all their accessibiltiy attempts were per the ADA, In my opininion, it is better than nothing.  At least there is the awareness of the need.  I say, Arriba Mexico!  Keep improving your environment.  Looking forward to more improvements for the disabled!